Your experience on this site will be improved by allowing cookies.

Vitiligo affects approximately 0.5–2% of the general population worldwide, and it may appear any time from shortly after birth to old-age. Men and women are equally affected. It is an acquired, idiopathic disorder characterized by circumscribed depigmented macules and patches. These white patches are due to the loss of melanocytes (the cells that produce the melanin, the most important pigment of the skin). Vitiligo lesions are usually asymptomatic, meaning that they are not itchy (although they can be in some cases), they do not burn or hurt. Vitiligo lesions are never contagious. We distinct different types of vitiligo depending on the clinical presentation. The more common form presents as several lesions globally symmetrical. Vitiligo can be also localized and limited to one or two small patches. Sometimes, the lesions affect only one location, often like one strip restricted to one side of the body. This type is called segmental vitiligo. Finally, vitiligo can rarely affect almost all the body leaving only few remaining still pigmented areas. This is generalized vitiligo.

The evolution of vitiligo is unpredictable. It can remain stable for years, extend more or less rapidly or sometimes regress (most often thanks to sun exposure). Only skin is affected, and people affected with vitiligo has the same life expectancy compared to the rest of the population. Thus, vitiligo is still often considered as a benign esthetical problem. However, it is now well demonstrated that vitiligo is a well-defined disorder often associated with a strong impact on the quality of life of affected people. It has been demonstrated that the impact of vitiligo on professional, social and sexual life is higher than in diabetes, depression, or even some cancers.

Significant therapeutic advances have been done these past years. However, a complete repigmentation (with a normal coloration of the skin) is not always achieved in locations such as bony prominences or extremities of hands and feet, that remain very difficult to treat. However, the pathophysiology of vitiligo is much better understood now and new therapeutic options are under development leading to encouraging perspectives. 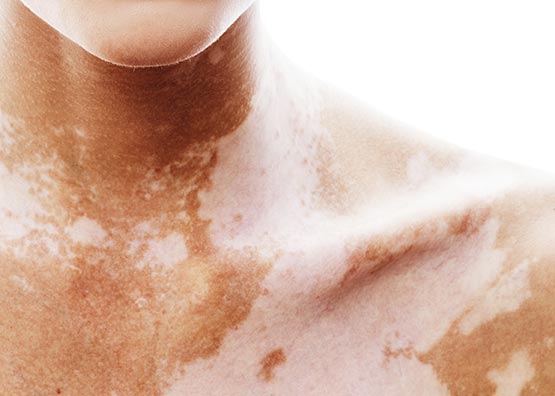